Shortly after moving to Lincoln City, my husband and I found a beautiful multicolored glass float when walking along the beach, and it made us feel pretty darn special. When telling the tale, however, we found out we weren’t that special after all – we had found one of the floats from the then fairly new Finders Keepers program, where hand-blown floats are dropped along Lincoln City’s roughly 7-mile beach above the high tide line during the off-season (it’s since been... Read More

They don’t call it Seven Miles of Smiles for nothing. Nestled between Tillamook and Newport, Lincoln City is home to 7 miles of inviting beachfront along the Pacific Ocean coastline. U.S. Highway 101 ribbons through the vibrant Central Coast community that keeps visitors grinning from ear-to-ear with an abundance of outdoor Oregon recreation, seaside shops, art galleries, coastal cuisine, stunning scenery, local traditions and more.

Beach-bum it in Lincoln City, Oregon …

On Lincoln City’s broad sandy shoreline. The welcoming public beachfront is the area’s signature attraction where an abundance of Pacific Northwest adventure awaits. There’s whale watching, surfing, beach combing, boating, fishing, kite flying, storm gazing and gathering around a cozy bonfire to witness the sun dipping into the oceanic horizon – a great way to end a day full of new memories made.

In addition to miles of pristine beach, travelers can also explore Devil’s Lake, a 685-acre body of water, stretching more than 3 miles in length. The lake is naturally shallow and sheltered from the sometimes unforgiving coastal winds. This makes for warmer waters and a calmer surface, ideal for leisurely boating, swimming, sunbathing and picnicking.

Through old-growth forestland, past an 80-foot waterfall or to a massive rock made famous by a 19th-century love story. These are just a few of the treks you can make with things to do in Lincoln City.

Hikers will get a robust workout making their way up the Cascade Head Trail and into old-growth forests with glimpses of the Pacific peeking through a canopy of towering timbers. Or discover Drift Creek Falls Trail for a family-friendly outing with a flat, level path and dramatic views of the fall’s cascading water from 80 feet above. The trail is 3 miles roundtrip, moderately steep at times and crosses a swinging suspension bridge from which hikers can view the falls – so don’t forget your camera.

If a romantic getaway is on the agenda, hiking to Proposal Rock is an activity that’s attracted lovers for decades. You’ll find this iconic haystack on the shores of the postcard ready village of Neskowin, just north of Lincoln City. The basalt sea stack acquired its name in the 1800s when Captain Charley Gage rowed his ladylove interest, Della Page, out to the forested rock and popped the question.

Like the locals do with Lincoln City, Oregon, events and festivals, which are a defining parts of Lincoln City’s story.

Thanks to the city’s coastal location on the 45th parallel, halfway between the equator and the North Pole, the wind often kicks up in Lincoln City, Oregon, earning it the title of Kite Capital of the World. The beachfront is home to two of the largest annual kite festivals worldwide: the Lincoln City Fall Kite Festival and the Summer Kite Festival, held at the D-River Wayside State Park.

Finders Keepers is  a treasure hunt to uncover locally hand-blown glass floats on the city’s beaches from Roads End State Recreation Site to Siletz Bay. Starting in mid-October the Float Fairies hide about 3,000 of these colorful globes that resemble oversized hollow marbles adorned with swirling patterns. Fairies use the term “hide” rather loosely, because they want seekers to find and keep the beautiful treasures as mementos.

Back in the day, beachcombers frequently uncovered glass floats that originated in the eastern part of the world. Japanese fishing crews used the spheres to float their nets. Some that broke free made their way to the sandy shores of the Pacific Northwest. Now that fishing vessels worldwide use buoyant plastic, a blown glass float is a rarity. However, Finders Keepers lets Lincoln City, Oregon, keep the tradition, the fun and the art alive.

And there are always enriching Lincoln City, Oregon, activities going on at the Lincoln City Cultural Center with a wide array of creative and educational classes, activities, exhibits and events for all ages. Housed in the beautifully restored Old Delake School (built in 1927), it’s not uncommon to find musical performances, poetry readings, film festivals and other celebrations of everything artistic in the works.

Grab a piping hot bread bowl of chowder at a renowned family establishment and enjoy it while overlooking Siletz Bay, or savor fresh Oregon wild chinook salmon at places just off the highway. Lincoln City, Oregon, restaurants feature dining hot spots that have served coastal customers for decades – sometimes close to 70 years at some places – and remain steadfast favorites among locals and visitors alike.

Of course, there are many more dining delights in Lincoln City, Oregon, to experience the Pacific’s harvest. From upscale seafood grills to oyster bars to cozy cafes, there’s no shortage of flavors and ambiance. Lincoln City is loaded with eateries showcasing ocean-to-table cuisine at its best – from crab legs to lobster tails and fish tacos galore. It’s a seafood-lover’s paradise, so grab a bib and bring your appetite!

At your pick of the numerous Lincoln City, Oregon, hotels, motels, bed and breakfasts or resorts. Get pampered and play away at oceanfront resorts with 18-hole golf courses, spas, rooms with views, fine and casual dining options, gift shops, casinos, daytime and evening entertainment and all-you-can-eat buffet bliss. There’s plenty to delight all interests, and you can spend your vacation, staying and playing your days away.

For luxury retreats, follow the highway a little farther south. There you’ll find rugged yet refined woodsy retreats in secluded spots between Siletz Bay and the ocean’s beach. Spend your days in the wild, though you’re far from roughing it with the activities like 18-hole golf courses, holistic wellness spas, eco-adventures and coast-to-table restaurants.

If you want to stay in a place that’s entirely your own, opt for a Lincoln City, Oregon, vacation rental. Properties with private decks boasting views of the Pacific and multiple rooms give everyone you’re traveling with ample space to spread out.

There you have it – from the sandy shores of the mighty Pacific to the best in seafood and ultimate seaside adventure.  Lincoln City, Oregon, captures it all and has a longstanding reputation of capturing the hearts of travelers worldwide as a favorite vacation destination.

Can I build a fire on the beach in Lincoln City, Oregon?

Oregon law permits small, controlled fires on the beaches as long as they aren’t near the beach grass or drift log piles. Fires should be no larger than two-by-two feet.

What is a sneaker wave?

A sneaker wave is just what it sounds like – it’s a large wave that sneaks up the beach and can catch unsuspecting beachgoers off guard. They’re big, fast and unpredictable. They usually occur during outgoing tides, and it’s a good practice to never turn your back to the ocean.

Can I drive on the beach in Lincoln City, Oregon?

Driving isn’t allowed on the beaches in Lincoln City – believe us, you don’t want to get stuck in the sand. You can, however, park on the beach at the Northwest 15th Street access road.

Where can I go crabbing in Lincoln City, Oregon?

Siletz Bay is a popular spot for crabbing in Lincoln City. Instead of crab pots, most anglers use a type of fishing pole with a trap on the end. During outgoing tides, this is also an active scene for clamming.

Where is Lincoln City’s downtown?

Lincoln City, Oregon, is a little different from your typical town in that there’s not any one specified downtown district. The area is made up of several small communities, each bringing their own defining feature to the city as a whole. Although, if you’re looking for the place with the most commercial bustle, head to the Ocean Lake neighborhood for an active shopping scene.

What are the floats?

After spending a bit of time in Lincoln City, Oregon, you’re likely to have heard people mention floats. So … what exactly are they? These small, hand-blown glass floats harken back to Lincoln City’s history, when Japanese net floats (blown-glass orbs) were carried eastward and washed up on Central Coast’s shoreline. Today, a group of locals place thousands of glass orbs on the city’s beaches for lucky beachcombers to find throughout the year. It’s an annual tradition known as Finders Keepers. 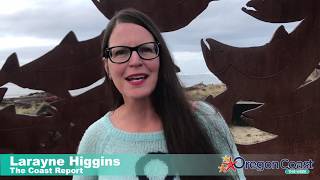